Nothing Beats a Garden Party 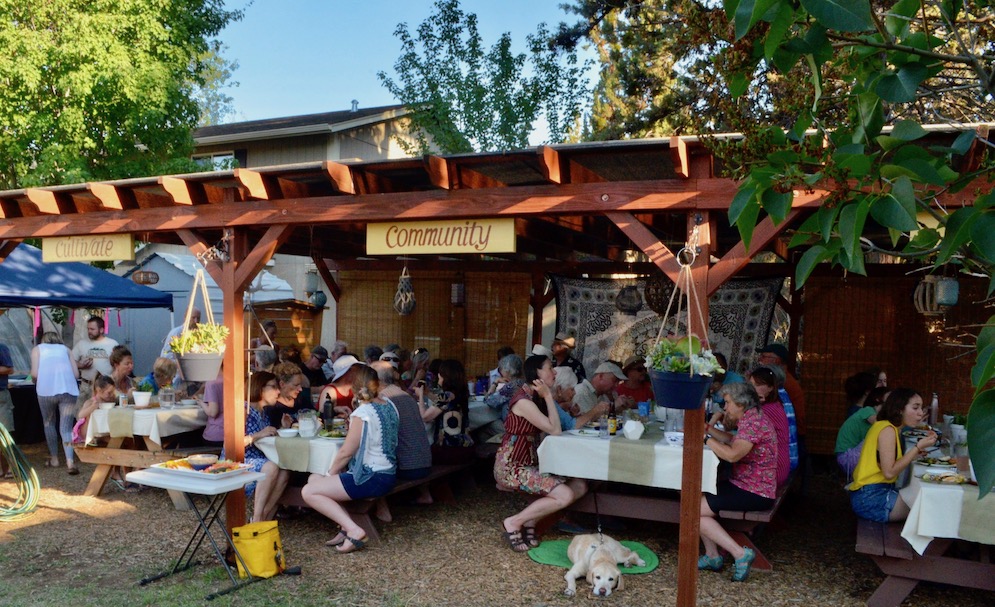 What the world needs to do is stop for a moment and throw a garden party. I am aware, this may sound a bit oversimplified. However, in this simple act, we might realize that we already have what makes America great.

It’s Time for a Garden Party

I know there are some who mourn the loss of “real” America and that corresponding life. But, I’m here to inform you, with absolute confidence, that the country we love is still very much alive; and where do we look to find it?

In one word: community.

Let me back up a bit. Recently, I had the pleasure of cooking for a group of neighbors living in a co-housing community. They celebrated summer’s arrival and their completely revamped and upgraded community garden. They anticipated a party with abundant food, laughs, conversation and sharing. That’s just how they roll.

“We seized the opportunity to celebrate what we have created, and continue to create while working together as a loosely organized collective who made this bash happen,” a long-time community resident summed up.

For those not familiar with co-housing communities, I’ll quickly sum them up. At the most fundamental level, co-housing is an intentional community where the residents own or rent their own family homes, and work with their neighbors for the collective welfare of the community. The layout varies with each community, but they each contain common buildings and areas to gather for work, play or grubbing out.

It would be much like living near a large group of extended family that you actually like, or meeting awesome people and then discovering that they are already neighbors. Even going to get the mail can take half an hour, depending on whom you run into along the way.

The occasions we remember most all seem to involve food. While it’s not always the showcase, good food is often fundamental to a party’s success. For this party, I wanted to offer yummy food that was pleasing to the spirit and was also unobtrusive enough to allow the neighbors to talk amongst themselves.

Important, this was, because what struck me most with the folks in the community is their genuine affinity and respect for one another. The community’s population is a motley crew, with a plethora of personalities, quirks and delightful idiosyncrasies. They all live together in close proximity, without fences, and see each other frequently.

Considering the climate in the world today, that scenario could either seem like a recipe for disaster, or possibly an 80’s teen flick. But, disaster is definitely not where this boat is heading. In this community, individual differences are embraced, as are the individuals, and they are treated like seasoning for a modern Stone Soup.

Cooking for a gathering of fifty neighbors, celebrating their garden, summer, and community, the menu had to be something special and memorable, but not complicated. Here is what I decided to serve:

I had also planned on making a version of a hibiscus tea punch which my kids and I formulated while on vacation. We called it Prince Punch. But, there really was a lot of food and drink and not so much time, so I decided to hold off on that idea. This was wise, as since there was so much wonderful food and drink already, we didn’t need it.

But, fine fellow fan of good food, drink, and phat beats, fear not. I plan on sharing the Prince Punch story and recipe soon in another installment. As for this one, I am happy to say that this party with my neighbors was a smashing success, with good times and full, happy bellies for one and all.